It’s Good To Be Bad

Everyday when I was in fifth grade my class would line up in the hallway outside of the cafeteria and wait our turn to go through the lunch line.  There was an old school fire alarm in the hallway.  A metal ball about the size of a bouncy-ball was connected to the fire alarm.  The alarm worked by lifting up and dropping the ball onto a sheet of glass, which would break and cause the alarm to go off. 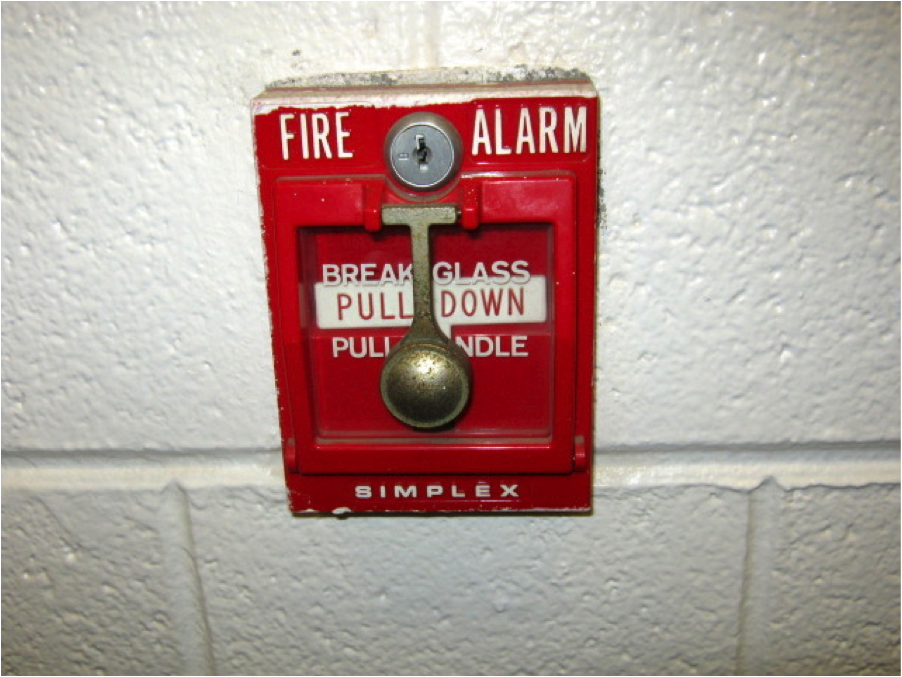 While waiting in line, the class troublemakers – myself included – would take turns lifting the ball and dropping it to see who could drop the ball from the highest point without breaking the glass.  It was kind of like the kids’ game Don’t Break The Ice.

On one particular day, I raised the ball all the way to the top and let it go.  Nothing happened.  Fearless, I sort of smacked the ball with my hand and with less force than before.  The alarm went off.  I guess it was the straw that broke the camel’s back.  Kids and teachers were running out of the school.  My friends and I casually strolled down the hall.  They, I’m sure, had permagrin.  I knew I was in trouble.  There were too many witnesses.  Now, I was focused on damage control.

I remember Ms. Ruesing, a school employee, running down the hall and hollering something to the effect of, “Brandon, this is not a drill.  We have to get outside.”  “I know.” I replied.  “I set off the alarm.”

To this day, my mother still tells this story to explain what a good boy I was because I immediately told on myself and I owned up to my mistake.  In fact, I was such a “good boy” that I did not get in trouble. Not at home. Not at school.  The only thing that happened to me was that I received my “warning” for the day.  We always got one free pass per day.

I’m sure that I was the “coolest” kid in school that day for doing something wrong, and my parents and all the adults were praising me for doing the right thing.  Lesson learned.

I often find myself telling my clients this story because sometimes the best strategy is to own your mistakes or admit your weaknesses.  If it’s something you can’t hide from, sometimes the best strategy is to say, “I messed up. I made a mistake. I’m sorry.”  It’s often hard to sell this strategy.  Pride gets in the way.  Some people seem unable to admit even the slightest error. Insecurity also plays a role.  It takes a lot of confidence to admit weakness – to surrender control.  But, the rewards for doing so can be great, as can the consequences of not doing so.

You probably think that I am referring to criminal law clients.  Criminal cases are only a very small part of my practice—5 percent or less—and I only handle misdemeanors.  I have certainly had this talk in that context and I have seen it have the desired effect.  However, in civil disputes, which make up the vast majority of my practice, there are often numerous opportunities to show maturity by acknowledging the obvious.  Further, when one party acknowledges a certain amount of responsibility and another part refuses to do the same, the juxtaposition can be priceless.  When presented with this kind of opportunity, just remember, sometimes, it’s good to be bad.

The monthly magazine of the State Bar of Wisconsin. Photo by Scott Dupras, Lemons Studio (http://www.thelgallery.net/)

This blog is published by, and reflects the personal views and opinions of, Brandon J. Evans in his individual capacity. It does not necessarily represent the views and opinions of his law firm, his clients or anyone else and it is not sponsored or endorsed by them in any way.

Brandon J. Evans is licensed to practice law only in the State of Michigan and the State of Wisconsin. Brandon J. Evans’ interpretation of judicial opinions or other law may be mistaken, and they are not intended to be relied upon. This blog is not intended to convey legal advice, and no one should act upon any opinions or information in this blog without first seeking qualified professional counsel.